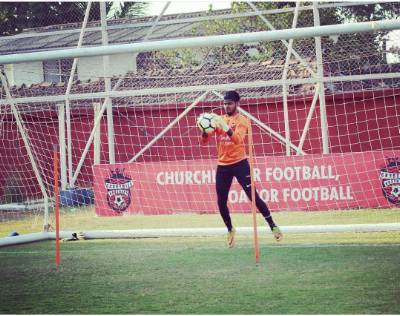 Sporting Group International India (SGII) are delighted to announce they have acquired the services of an Indian Goalkeeper to its ever-expanding roster of players.

Goalkeeper Ricardo Cardozo, 25, has agreed a deal for the UK and Delhi based agency to manage his contractual affairs

The Goa born shot stopper began his career at the renowned Tata Football Academy before signing for Bengaluru, then an I-League side, in 2013.  Cardozo was part of the Blues squad that lifted the Hero I-League title in 2014 and followed that with a second position twelve months later and a Hero Federation Cup title.

Following a twelve-month spell at Mumbai FC thereafter, the keeper signed for Goa based I-League side Churchill Brothers where he earned rave reviews for his performances despite being part of a side the struggled at the wrong end of the division.

Now out of contract, Cardozo will decide within the next few weeks as to which club he will play for next season.

“I am delighted to have signed with Sporting Group International who will look after my contractual affairs,” Cardozo said.

“They have earned themselves a good reputation in India for the professionalism, integrity and looking after the needs of their players.”

“I look forward to announcing my career plans very soon with the help of SGI.”

SGI’s General Manager Pranay Kapuria was delighted that the goalkeeper had agreed to join the stable of players:

“Indian Goalkeepers are always a hot property in the market as we have seen that in last season and with Ricardo we are very sure we will help him to find a club for next season where he will get more opportunities to showcase his talent  “.